It’s fascinating watching the transformative effect technology can have on the way businesses operate. From sales and marketing to travel and healthcare, no industry is safe! While businesses that embrace these changes with open arms succeed, those that hang back are bound to struggle.

Fintech is a prime example of how, when used in innovative ways, technology can disrupt the status quo, creating a new way of doing things. Recent years have seen a number of exciting new companies enter the field, as well as traditional companies embracing technology to help take themselves to the next level.

Visa Europe Collab teamed up with The 10 Group to create a campaign that would help showcase the future of payment technology. Launched during London Fashion Week S/S’16, the campaign, Cashless on the Catwalk, managed to combine high fashion with the latest in contactless payment technology. Celebrity guests, including Daisy Lowe and Alexa Chung, were given NFC-enabled rings, that allowed them to purchase items directly from the catwalk.

The campaign was such a success, it was awarded FinTech Marketing Campaign of the Year at the 2016 FinTech Innovation Awards.

Back in 2014, payment technology firm iZettle ran a six-day, pop-up store campaign in central London. Each day, a different business was given the opportunity to trade out of the temporary location, which would be kitted out in their own branding. The only stipulation was that all transactions had to be conducted using iZettle’s mPOS technology.

Not only did the campaign firmly position iZettle as an alternative to traditional PoS organisations, it also helped built their reputation as a supporter of small, local businesses.

3)     Simplicity is the Ultimate Sophistication - Nutmeg

UK robo-advisory and wealth management firm Nutmeg took home the FinTech Marketing Campaign of the Year prize at the 2015 FinTech Innovation Awards, thanks to their campaign on the London underground.

During ISA season, Nutmeg ran ads across the tube network, both in carriages and at strategic locations at entrances and exits to stations. Capitalising on the lack of signal underground, these adverts left commuters undistracted and with plenty of time to think about their personal finances. 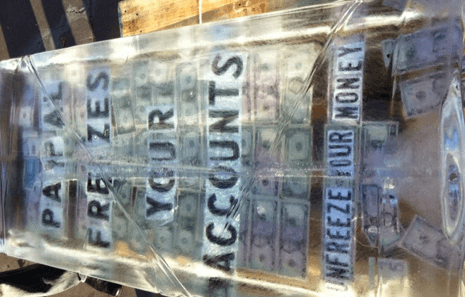 For our final campaign, we’re going all the way back to 2010. Back then, WePay dropped a huge ice block, stuffed with hundreds of dollars, outside PayPal’s developer conference in San Francisco. The ice block also featured a URL leading to a unique landing page with more information.

The stunt was designed to call out PayPal for freezing customers’ accounts, and soon received coverage both online and across mainstream tech magazines.

So, there you have it, four of our favourite fantastic fintech marketing campaigns. What’s your favourite campaign of recent years? Let us know via Twitter!